Catch Up With Northside Alumni at the Illinois vs. Northwestern Game 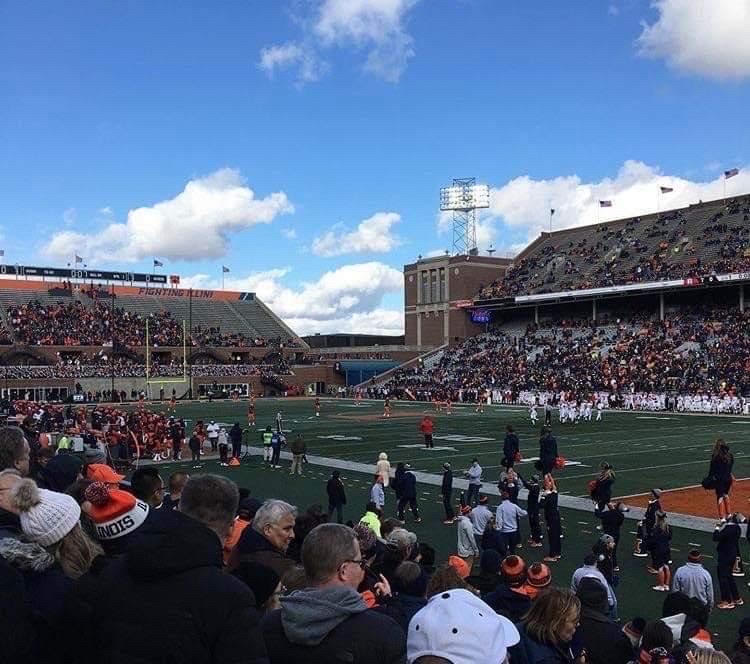 On November 30, University of Illinois at Urbana-Champaign went up against Northwestern University in football. The two schools, affectionately referred to as the Northside Southern Campus and the Northside Northern Campus, are popular college choices for Northside students.

The stadium was loud and everyone was into the game even though the fighting Illini were losing against the Wildcats in their home stadium.

The final score was Illinois 10 and Northwestern 29. Illinois students know how to show school spirit and how to make sure that even when they’re losing, they still have a blast at their home games.

Northside alum Gaberial Vara (‘19) has not been to a football game yet but he says he can “hear the crowds for blocks,” which shows how loud and excited Illinois students get during games. Vara said that the game spirit during Illinois games compared to Northside games is “different because everyone goes crazy orange and packs the stands.”

Elias Decker (‘18), another Northside alum, says that the school spirit at UIUC is “Pretty intense. There are chants for a ton of different occasions. For example, at the football half times, everyone gets a colored card and you hold it up. Then, on the jumbotron, we can see that we make a logo or a joke or something.” He said, “the most impressive thing is that it’s all student-run.”

The fact that the school spirit at Illinois is established and continued by the student body is what makes incoming freshmen feel excited to attend games.

Decker says that the school spirit at Illinois is “way different” from Northside. “At Northside games, you’d cheer and watch, but you’re mainly just there with your Sergio’s while watching your friend play. At Urbana, you’re on the bleachers hopping up and down and hollering.”

After their most recent game, in which Illinois beat Wisconsin in a comeback victory, the town was crazy. Decker was walking down the street after the game and people were chanting. He also “saw a group of people carrying a guy on their shoulders down the street saying he was the kicker for the team.”

Ricardo Ramirez (‘19), a freshman at Illinois and another Northside alum, says that “school spirit for sports is fairly prominent at Urbana, so long as you’re looking in the right places.” He sees this as a contrast to Northside saying “sporting events at Northside only ever really had spirit if it was a senior day, but every other day of the year there was no display of sporting school spirit.”

It is clear that these alumni feel that they are part of a strong school community and even though they might not be used to the spirit, Illinois makes it easy for them to adjust and get involved in the action.