Northside’s library underwent a major renovation over the summer and at the beginning of the school year. With new furniture, a new use for the second floor, and an entirely new setup downstairs, the library is almost unrecognizable to returning students. The library opened in early October and is a wonderful resource for every student.

Some of the improvements include brand new floors and furniture, as well as charging stations and interactive spaces. Ms. McCreedy said “Most of the furniture is mobile and can be rearranged to the students’ content. The library has been made more customizable and more collaborative.”

Beyond the more noticeable changes to furniture and carpeting, other changes were made as well. The most drastic change was that the reference library was brought downstairs and incorporated into the lending library. This allowed the top floor of the library to be opened up as a large, open space for meetings and classes. 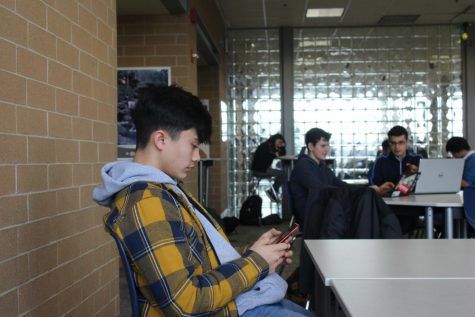 The process that led the library to these changes was extensive. Preliminary work started “around this time last year,” said Ms. McCreedy. Ms. Kelly Mest (Principal) was the head designer for the project. About a year ago, she created an early design before the project went into the fundraising stage. After she had an idea of what the budget would be, the design was finalized by Ms. McCreedy and Administration.

Ms. Mest explained how they decided it was time to renovate the library. A few years ago, Student Council had proposed purchasing new furniture, such as bean bag chairs, for the library. After receiving suggestions from other people and groups, Northside’s administration “did a needs assessment in terms of space and function,” said Ms. Mest. The team looked at other libraries as examples, and wanted to create a space that would acknowledge how much libraries have changed in the past 20 years. Once this first part of the process was complete, the fundraising began. 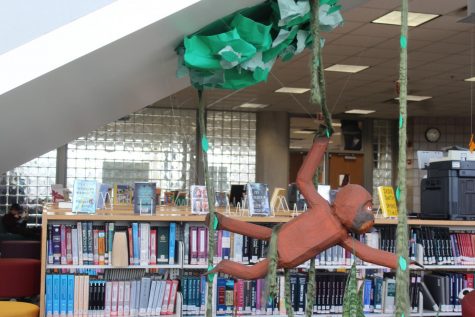 Under the library stairs

In order to raise enough money for the renovations, the planning team called upon the Mustang Reel, Northside’s videography club. Seth Karall (Adv. 007) said they started off by brainstorming who they would want to interview. The club went through a lot of drafts, and “the first few were sad, because they highlighted the bad parts about the library, to draw emotion and gain support.” The final video included a “range of perspectives as to why the library is important to the Northside community.” The members of the Mustang Reel interviewed students and teachers about the different ways they use the library, and also talked to Ms. Mest and Ms. McCreedy about the larger-scale importance of having a library. The video was shown at the Gala last year, and parents donated money to fund the project.

The renovated library has been beneficial to the Mustang Reel. They have more space for their projects, including green screens that are bringing new opportunities and capabilities to their video-making. The changes have also given them multiple projects to work on, from the fundraising video to a more recent project meant to thank Friends of Northside for their help in the renovation process.

The student population as a whole is also very excited about the most recent update to our school. “It’s pretty cool. I was skeptical, but it’s great so far. The charging stations are modern and fancy. They did a good job and it looks nice,” commented Alanisse Pineda (Adv. 108). Overall, the students seem excited about these new opportunities and the new setup. “The new furniture is comfortable. I like how it can be moved around,” said Liam O’Shea (Adv. 204). Theodore Woldenberg (Adv. 207), agreed, but also added that “I miss the old chairs. I think they were much better. This is good though. I like the outlets.” Although some students miss some of the old, beloved furniture, the new setup, aesthetic, and equipment are generally very well-liked. 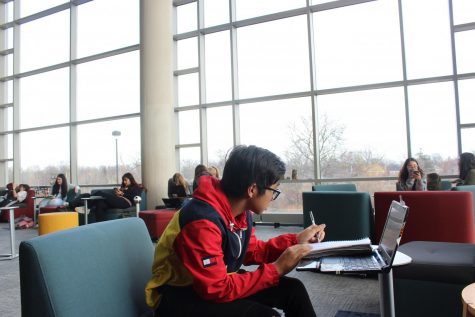 Ms. McCreedy emphasized how excited she is about these changes. She said the renovations really changed the environment, and “environment matters.” She has also noticed a shift in student behavior, attitude, and work ethic. “This new library is really nice,” she said, “it almost feels like I am at a Starbucks or a union hall at a college.”

The best part about the renovated library is the fact that students are in it, said Ms. Mest. The construction was delayed because there were flooring issues; some of the electrical wiring was exposed, so students were unable to access the space for the first month of school. “People would press their faces against the glass and look inside,” said Ms. Mest, “ which is funny now but it broke my heart then.” The most exciting part about the reopening is “seeing the space being used in the way we anticipated it being used,” she said. She also highly recommends the community puzzle space in the corner.

The difference between the new library and the old is remarkable. The library has always been helpful and a wonderful resource for every single Northside student, but it now has many new features for students to take advantage of. Students have especially found it to be a place of productivity and focus. Noah Villiallon (Adv. 205), said “The new library brings a new vibe which makes people actually want to do work and focus. I’m seeing more people in here than I ever did before.”