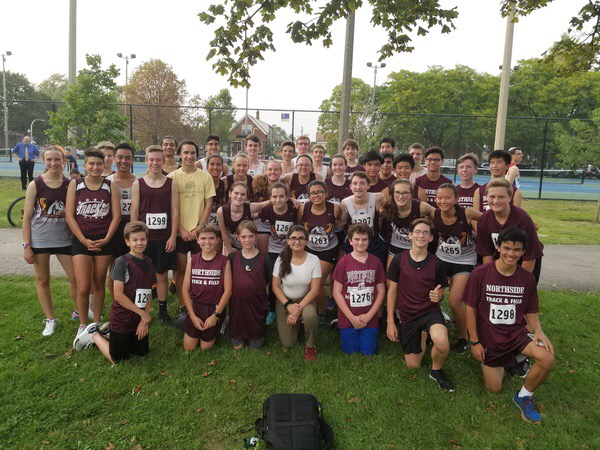 The Northside Cross Country Team is coming back strong this year as they competed in the Steinmetz Fall Frolic meet at Riis Park on Wednesday, September 11, 2019. The men’s team placed first out of fifteen teams with 57 points. The men’s team is teeming with potential while being supported and led by the upperclassmen this year.

Last year, the men’s team made it to regionals for IHSA in Division 3, the highest division, at Loyola Academy. Some of the senior runners included Gabe Vera, Norberto Nieves, Kris Ushijima, and John Kim. They were a crucial part of the team last year, but have all graduated. The remaining upperclassmen are keeping the team strong and competitive. This includes Resty Fufunan (Adv.007), Ezra Hill (Adv.106), Seth Karall (Adv.007), Jeronimo Najarro (Adv.002), and Maciej Zychowski (Adv.103). Karall, team captain, states, “The season thus far has gone great. There have already been PR’s on the team from top runners to newcomers, which is very impressive for barely even reaching midseason. Outside of individual times, our collective men’s and women’s’ teams have performed very well. Both teams placed first in the Steinmetz Invite on September 11, 2019. City and State are still far away but we have been working extremely hard so far to make it far into the fall and stay a winning team.”

Other than producing strong results, the team has several important traditions. Some of these traditions are in the form of PR sticks and pie runs. As Karall explains, “At the beginning of the season, we have everyone write down their PR, or personal records, on a popsicle stick. When they beat this time, they break the stick and create a new one to try to beat. Another tradition we have is our pie runs, where we run to First Slice pie to grab some delicious pie and food, usually right before the city meet. Before every meet, we will huddle up and perform one of two chants that have been part of Northside’s cross country team for years to get us mentally and physically prepared for the race soon to follow.” Cross country is made up of a team of runners who work together to better themselves and their team. It is not only an individual sport- it is a team sport that relies on support from one another. These traditions tie into the team’s bond and build it up throughout the season. These relationships formed through these traditions are needed to make the team closer and stronger. Seth Karall said, “You not only build a relationship with them but you form trust and friendships that can last much longer than the time you plan on running.”