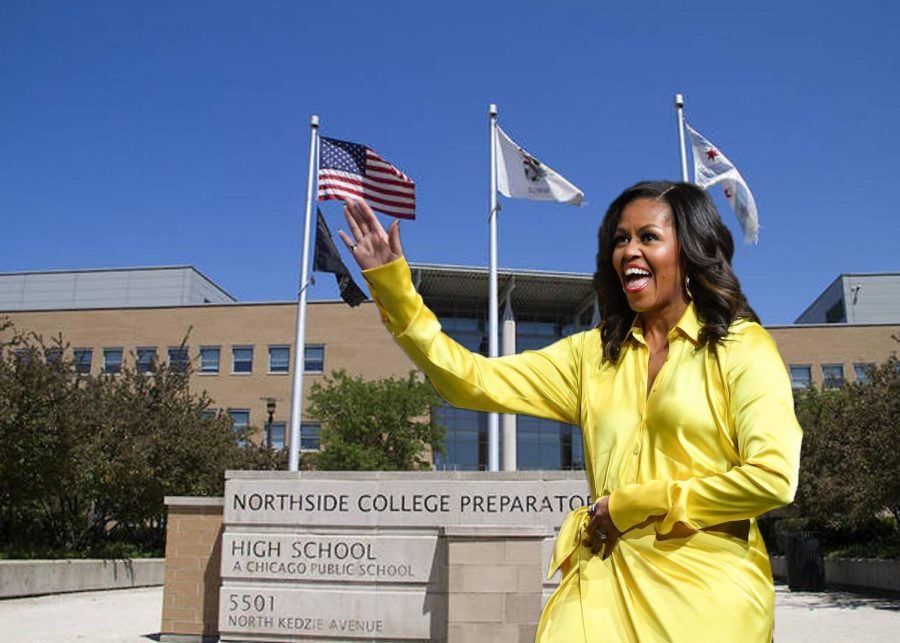 Northside has unofficially announced former First Lady Michelle Obama will become our new principal. After a rigorous vetting process with highly-qualified candidates, including CPS CEO Dr.  Janice Jackson and CTU President Jesse Sharkey, the Local School Council voted 11-1 in favor of Mrs. Obama becoming the new contract principal of Northside College Preparatory High School. The one vote in opposition claimed it should be former President Barack Obama as principal instead.

Assistant Principals Ms. Kaitlin O’Hare and Mr. Barry Smith will be promoted to the positions of Secretary of Academic Affairs and Communications Director, respectively.

Despite her alma mater being Whitney Young, Mrs. Obama could not resist the opportunity to lead the top high school in the state. We reached out to Whitney Young for comment, but they did not respond.

Although it has not yet been confirmed, there is talk about former President Barack Obama being hired as a second AP U.S. Government & Politics teacher at Northside.

Mr. Randy Snow (English Department) expressed his support for our new principal Mrs. Obama and noted his friendship with her husband: “Barack and I go way back. We were basketball buddies and actually met at the barbershop.”

Citing her Let’s Move! Campaign as First Lady, Mrs. Obama plans to get rid of P.E. waivers at Northside. Additionally, chocolate milk will no longer be served in the cafeteria.

Sources close to Mrs. Obama said her memoir Becoming will be required summer reading for all English classes in the 2021-22 school year. It has also been rumored that the 2022 Senior Prom will be held on the White House lawn courtesy of Mrs. Obama’s good friend President Joe Biden.

There will be a new dress code for faculty and staff. Mrs. Obama’s stylist Meredith Koop has said the teachers and administrators of Northside will be held to a higher fashion standard that is consistent with the looks she has designed for the former first lady. This will mean no jeans or hoodies are allowed for faculty and staff under any circumstances.

As a graduate of Princeton University, Mrs. Obama is also planning to form a partnership with the Office of Admissions there in order for Northside students to receive special consideration in the application process. The Northside counseling department has supported this initiative.

Some students have begun protesting the presence of the Secret Service in Northside’s building as they argue SROs have already been removed.

Teachers and students who live in Hyde Park may be eligible to carpool with Mrs. Obama on the way to school. However, due to security concerns, teachers and students interested in the carpool group will not be picked up from their homes. The meeting location will be the Obama Presidential Center, once construction is complete.

Mrs. Obama will take over from Ms. Stuber on April 1, the first day back from Spring Break.