“Knives Out”: a Modern Spin on the Classic “Whodunit” 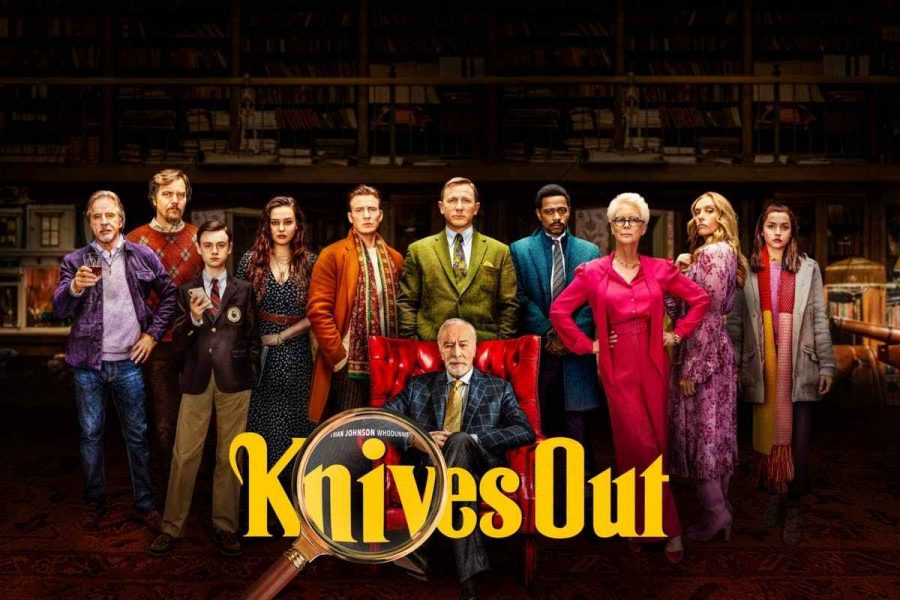 “Knives Out,” released in late November of last year, puts a well-executed and modern spin on the classic “whodunit” mystery film. When announced, the movie attracted a lot of attention from its all-star cast, including Daniel Craig, Ana de Armas, Chris Evans, Jamie Lee Curtis, and many more. With high expectations from fans, the film delivered.

“Knives Out” follows the estranged Thrombey family, who begrudgingly reunite over the apparent murder of their grandfather and renowned crime novelist Harlan Thrombey (Christopher Plummer) on his 85th birthday. While nearly everyone is considered a suspect, the story itself is told through multiple family members’ perspectives before, during, and after the crime. The story unveils twists and turns at an engaging yet (mostly) manageable pace, as the audience pieces together clues alongside family caretaker Marta Cabrera (Ana de Armas), Detective Lieutenant Elliot (LaKeith Stanfield), and the mysterious Detective Benoit Blanc (Daniel Craig).

“Knives Out” is largely successful in incorporating cynical humor and a light tone into a suspenseful mystery. The movie has its fair share of laughs and manages to keep a consistent playful tone, even during emotional or suspenseful scenes. With tension and disdain between characters apparent from the beginning, the movie’s on-edge dialogue makes sure that there’s no dull moments. Keeping an audience on the edge of their seats throughout the entirety of an over-two hour mystery story might sound difficult, but with a seemingly endless supply of suspects, red herrings, and plot twists, director Rian Johnson makes it look easy.

However, the constant flow of evidence and clues throughout the movie does come with slight downsides. During the story’s exposition, for example, the members of the Thrombey family offer their individual perspectives on the mystery through a series of interviews with Detective Benoit Blanc. While these scenes do include some of the highlights of the film’s witty dialogue, they are some of the few instances where too much relevant information, such as family relations, possible motives, and plausible alibis, is rapidly thrown at the audience. In these moments, though few and far between, the movie crosses the line from suspenseful, fast-paced dialogue to an overflow of clues where viewers are left feeling like they missed something crucial. That being said, it’s hard to criticize “Knives Out” for bombarding the audience with hints while considering how it crafts its ending. Staying true to its roots and following suit with the classic “whodunit”, the film reveals all in the end and cleanly ties up loose ends. The film leaves the audience satisfied, but guessing until the last second.

The film has received an Academy Award nomination for Best Original Screenplay, three Golden Globe nominations, and nearly 80 other various nominations and awards. At the Oscars, Johnson also confirmed his plans for a sequel, focusing primarily on Daniel Craig’s character, Detective Benoit Blanc. All in all, it’s no surprise “Knives Out” was a hit with audiences this winter; the unique combination of an intense murder mystery with a lighthearted tone, all within a modern-day setting, helps the movie stand out against many of the past year’s blockbusters.