Semester in the Senate 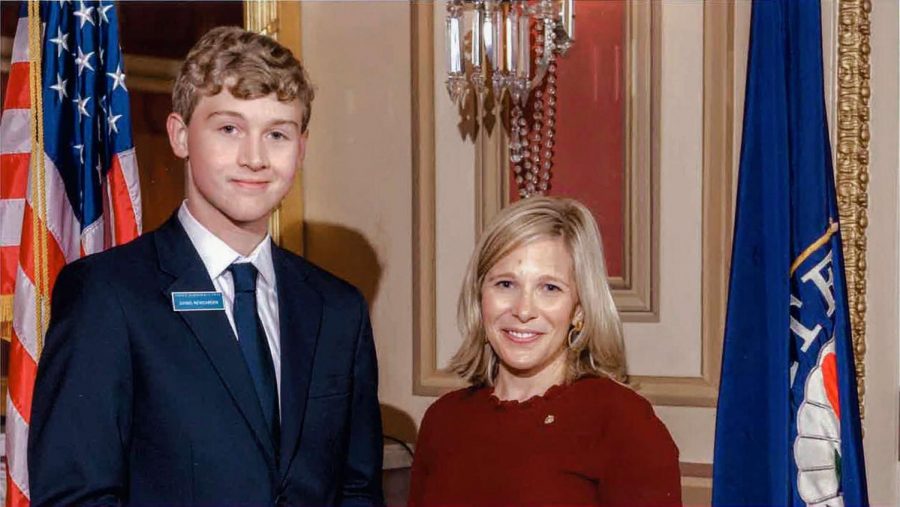 Daniel Newgarden with Secretary of the Senate, Julie Adams. Photo by the Senate Photo Studio.

As Northside students were frantically studying and taking first-semester final exams, one junior was hopping on a flight home from Washington, D.C. For the last four months, Daniel Newgarden (Adv. 108) and 29 other teenagers from across the country walked the halls of Capitol Hill working as Senate pages.

The Senate Page program is a prestigious and highly selective opportunity to work with the U.S. Senate. Newgarden was appointed by Illinois Senator Dick Durbin for the fall term. “This is an amazing opportunity that not a lot of people get to do,” said Newgarden. “I can’t miss out on this chance to see Congress doing its work.”

One essential function of Senate pages is to act as messengers for their respective senators. Senate pages ride the subway in the Capitol to travel between the Russell, Dirkson, and Hart office buildings. “The access was so cool. Senate pages got to go to a bunch of places that most people didn’t,” said Newgarden.

On a given day, Senate pages perform various tasks: assisting in the operations of the floor, setting up the chamber, and retrieving congressional records and other requested documents. “On the job, it was just about the actual procedure, but I didn’t realize how much was decided by the personalities on a day to day basis,” said Newgarden.

The fall term of the Senate Page program this year was particularly unique because of the historic impeachment trial. Typically the Senate floor is empty, but all senators were present during hearings. When Congress is in session, Senate pages fill water glasses, set officials up to speak, find senators who haven’t voted yet, and operate the doors. Newgarden met Chief Justice John Roberts, Senator Lankford (R-OK), Vice President Mike Pence, and Senator Scott (R-FL).

Newgarden also experienced a humorous and lighthearted side of Senator Cory Booker (D-NJ). “I bring Senator Booker a glass of water and he gulps it down immediately. I fill it up again and he looks at me very knowingly,” said Newgarden. “Then, Senator Harris, a few seats down, signals for me to get her water, but Senator Booker brings her the water as if he’s a Senate page.”

Although Senate pages spend most of the day working, they still attend school. From 6:15 a.m. to 9:45 a.m., Senate pages take core classes every morning in the basement of their dormitory. Newgarden’s schedule consisted of classes similar to those offered at Northside: British Literature, English Composition, Pre-Calculus, and Political Science.

When not in early morning classes or the Capitol Building, Senate pages can be found in the Daniel Webster Residence. Newgarden had roommates from Wyoming, Tennessee, and Maryland. “I definitely broadened my political spectrum,” said Newgarden. “I didn’t think I would be able to get along with people with different political views, but when you’re there you just have to ignore it. I know it sounds cliche, but it taught us bipartisanship.”

The Senate Page program is held in the fall, spring and summer. Students must have a 3.0 GPA and be at least 16 years old. In Illinois, Senate pages can be appointed by Dick Durbin or Tammy Duckworth. Newgarden recommends the program to any interested underclassmen.

“It’s absolutely surreal when you’re on the Senate floor,” said Newgarden. “Afterwards it’s like, wow, I really did that.”