For the past month, one of the continents of Earth has been burning at a devastating rate, leaving behind a billion animals and at least 33 of its inhabitants dead. So far, around 40,000 square miles have been burned, 2,000 homes have been destroyed, hundreds of thousands of people have been evacuated, and the estimated economic damage is approximately $4.4 billion. Even after the fires die down, they will leave behind a lack of food and shelter for animals, an ongoing environmental crisis, and an economic crisis. But how did this all start?

Wildfires are typically a natural part of Australia’s ecosystem. Because fires trigger germination and eliminate disease and insects, many plants and organisms depend on fires for survival. However, unreasonably high temperatures and drought over the last few months have contributed to conditions that allowed the fires to continue to an extreme level. Although dry climate conditions are the biggest contributor to the bush fires, dry lightning and arson are also factors.

While about two dozen people have been arrested for arson, researchers have stated that it is “unreasonable to believe that the actions of two dozen people sparked wildfires that large and destructive.” However, as Annabella Glotzbach (Adv. 008) said about the arson, “I know that only a few of those fires were started, but because they got started and since Australia is in a drought, of course the fires spread.” It is hard to ignore the fact that the unusually dry and hot climate this summer probably contributed most significantly to the spread of the fires. 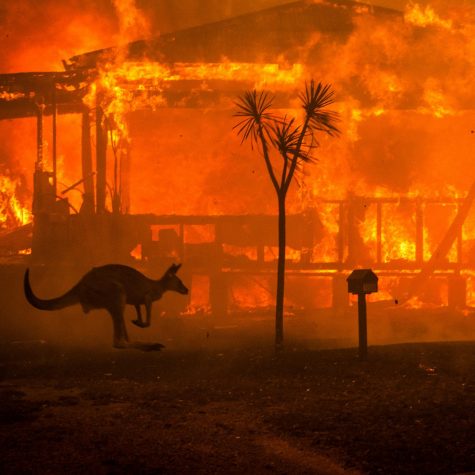 Normally, the fires allow for regrowth, burning in patches and leaving behind unscathed vegetation. However, the fires are currently burning in areas that could take decades or longer to regrow. It is also almost certain that the fires will occur again in the future. They are also contributing significantly to the amount of carbon dioxide in the atmosphere, as Australia has already emitted 400 million tons of carbon dioxide this year (last year, the total emissions were 540 million tons from man-made sources). The air is nearly toxic and unbreathable at this point. Australian news sources are measuring the quality of the air with a “Ciggie Index”, which rates the air quality to the equivalent of cigarettes one would smoke per day. On Jan. 12, the “Ciggie Index” was 19.

Even though all of these impacts are current, once the fires end is when the real work begins. Nearly a billion species are threatened, and as Glotzbach stated, “A lot of Australia’s natural beauty has been destroyed and popular tourist destinations that protect wildlife have also been destroyed to the point that koalas, a famous and lovable species that are native to Australia, are virtually extinct.”  After the last devastating fires in 2007, many residents and firefighters suffered from PTSD after losing their homes, worldly possessions, and maybe even friends or family. Another important community that will be severely impacted by these fires is the Aboriginal community, who consider their environment and animals to be a part of them and their culture. Many unique animals and plants that held a lot of significance to the Aboriginals, that inspired their stories and their history, have been lost forever, which is devastating for the community. Moving on from this, mental health will be an important factor to consider.

There have been many people attempting to help the Australians, including donations from celebrities and US firefighters flying to Australia. These donations have also sparked many controversies. Amazon billionaire, Jeff Bezos, has been criticized after donating $1 million in AUD ($690,000 USD), which is the amount of money he made every 5 minutes in 2018. An Instagram model sold provocative photos online and used all of the money for donations to Australia, raising almost $1 million. Australian Instagrammer and comedian, Celeste Barber, has raised over $50 million in donations. The Australian government has also promised $1.4 billion in disaster relief, but only $50 million will go towards the wildlife, which is concerning for many conservation efforts. However, the total amount raised for Australia is not nearly as much compared to the amount raised for the Notre Dame Cathedral fire last spring, and Australia faces the extinction of unique species, cultures, and ecosystems. 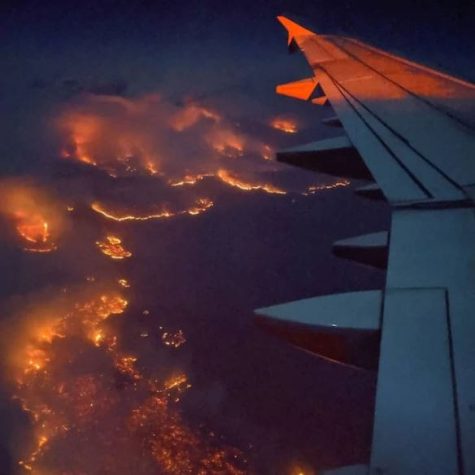 The heads of Students United for Change, a political action organization at Northside, had many comments on the situation. Tanvi Bagal (Adv. 103), who is on the board of the organization, stated, “I think that [the fires] are a result of perpetual ignorance regarding climate change and it’s a wake-up call for the world in the form of catastrophic destruction.” She continued, “If nothing is changed in terms of carbon emissions and renewable resources because of these fires, I don’t know what will make the world change.” Northside students are well known for their political and environmental activism (if the all-school colloquium focused on climate change is any example.) It is situations such as these fires that allow students to band together to help protect not just the future of Australia, but the future of the planet. In order to fight against climate change, one of the most well-known ways is to go to local governments, march in protests, or simply stay updated about current environmental issues. “If we want to have any chance at saving our future and the next generation’s futures,” Carol Dai (Adv. 003) said, “we need to stay active about not only our carbon footprints, but the footprints of large corporations. We need to contact our local governments, and make sure they know our opinions are relevant and that we will fight for our futures.”

If you want to help Australia, you can use the following link to donate, and make sure to stay updated on future progress.